The PG Centre normally meets once a month from August to November and January to May. The meetings are informal and VISITORS ARE WELCOME. The Centre occasionally finds it necessary to change its meeting date, location or time. To verify the time and place of next meeting you can visit here. If no meeting is shown, there will be none that month. 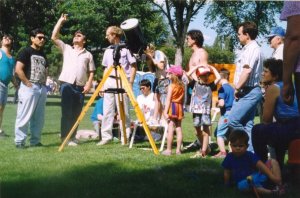 Observatory Activities – 2015
Back to top 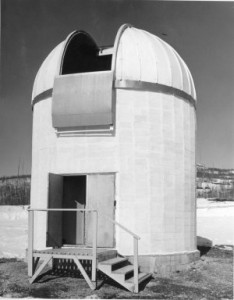 The Tabor Mountain Observatory as it appeared in 1984.

In 1979 the Prince George Astronomical Society (PGAS) was founded and the construction of the Tabor Mountain observatory was begun.

The task took 5 years to complete by a team composed almost entirely of volunteers led by Bob Nelson. The Tabor Mountain Observatory opened to the public on September 22, 1984.

The lenses and mirrors for the telescope were purchased while the telescope’s body and machinery were built in the College of New Caledonia’s millwright shops.

The dome was constructed from an old farm silo roof. A slot was cut into it and a sliding door was fashioned to allow the telescope to see the heavens. CP air donated old aircraft bearings for turning the dome.

If the Tabor Mountain Observatory was built by professionals it would have cost more than $200,000. Instead with the help from volunteers and donations of materials by local businesses and individuals it only cost $20,000.

Most of the money was obtained with two grants one from B.C. Lotteries and the other from the Vancouver Foundation. The club operated from Tabor Mountain for four years, providing an exceptional view of the sky to school groups, the general public, and club members. In 1988, the observatory was closed due to vandalism, thieves, and poor winter access
Back to top 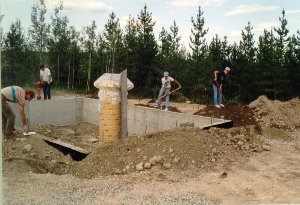 Construction of the new Observatory on July 1992. 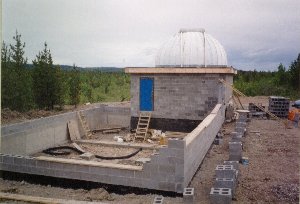 Construction of the Classroom on May 1993.

In the summer of 1992, construction of a new observatory near West Lake began. During the spring of 1993, the PGAS received funds from the Science Council of British Columbia to help with the completion of the Observatory. On August 6, 1993 the Prince George Astronomical Observatory (PGAO) was opened to the public.

Since the opening of the PGAO, a grant from the former Ministry of Advanced Education, Training and Technology has enabled the society to promote science education within the Prince George community through school visits, public viewing sessions and participation in special events such as Science and Technology Week and the Central Interior Science

Exhibition. The PG Centre now provides regular observatory access to the general public and special interest groups such as Cubs, Brownies and schools. We invite you to help with our continuing efforts and growth.
Back to top

Main Telescope and other Equipment 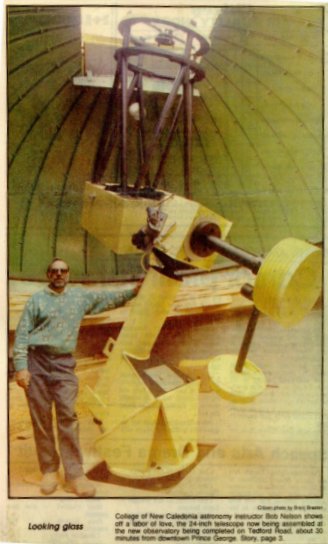 The Observatory houses a 0.61 meter Cassegrain telescope, one of the largest amateur telescopes in Canada. In addition, the observatory equipment includes several smaller telescopes, a modern CCD camera for astrophotography, several computers and lots of astronomy software, digital setting circles, an H-alpha filter and projection system for viewing the sun, laser pointer for pointing out constellations and interesting items in the sky, and a variety of eyepieces and filters to help visitors obtain the best possible view of the night sky. The observatory classroom can hold up to 45 visitors. Astronomical slides, video presentations, and demonstrations are part of our classroom activities.

Follow this link to find out more about joining our organization.

This site is best viewed with Firefox 19.0 or newer,and Internet Explorer 9 or newer.

All members on the Viewers email list will be notified via email when a key holder will be going out. To be added to the Viewer email list contact Dayton.

Photo of the Month

Learn more about our “Photo of the Month” background image, and how your photographs can be featured here.